WE ARE OPEN - For Sales and Aftersales

The prospective agreement offers you the option to return the Goods at the end of the repayment period for a Guaranteed Future Value of £921.18

The PCX125 is one of the quiet success stories of Honda’s two-wheeled line-up, having clocked up sales of over 140,000 units in Europe since its arrival in 2010. Its success is down to a formula Honda has had many years’ experience in perfecting: its strong, modern design allows it to slip elegantly into a style-conscious urban lifestyle, while compact dimensions ensure it can plot a path through busy traffic - and park - with ease.

At this stage of its development more power at high rpm – with no loss of torque down low – was the target for improved performance in higher speed ranges. Peak power is now up .3kW to 9.0kW @ 8,500rpm, with peak torque of 11.8Nm @ 5,000rpm.

To achieve the gain the airbox now has a 1L larger volume than the previous design (achieved thanks to the rear shocks moving backward). The intake is positioned to the left and the location and profile of internal parts has been revised to allow the smoothest airflow path possible.

The compact radiator – integrated into the exterior of the right-side crankcase – uses a new shroud design with a larger volume at the two exhaust ports to improve transmission of hot air. This enhancement means a smaller fan – down 7mm to 125mm in diameter, with revised blade shaping – delivers highly efficient cooling without the need for a larger radiator to deal with the extra heat generated by the increased power.

Also redesigned are the left side crankcase and the drive/driven pulley wheels of the V-Matic continuously variable transmission, which are now larger and feature revised profiles expanding the range of gear ratios. This change maintains acceleration in the low-speed range (compared to the previous model) and delivers linear – and stronger – acceleration at mid- to high-speed. It also reduces belt friction, which contributes to the outstanding 47.6km/litre fuel efficiency (without Idling Stop, WMTC mode). This results in a tank range of over 400km thanks to the 8.0 litre tank.

The Idling Stop system has functionality to ‘read’ the battery charge and turn itself off to avoid excessive drain. The battery itself is a large, long-life YTZ8V unit.

A design signature of the PCX125 has always been the bodywork – with its strong character line and ‘block’ primary paint colour – flowing together as a whole, front to rear.

The new PCX125 expands on the theme, and employs new, natural contours of continuously varying curves, delivering a strong visual statement with an upmarket feel. Again, the smooth, large areas are painted in the primary colour and link front to rear without interruption, and the lower bodywork is also much more integrated into the overall styling.

Another detail redesign is the engine cover and airbox inlet, which are styled together as integrated parts. Finished in metallic silver, the engine cover emphasizes a solid mechanical strength; above it a black cover – which incorporates the air inlet – is elegantly shaped with a mixture of firm lines and softer curves.

From the front, the PCX125 also stakes out a strong identity; the LED headlights and razor-thin position lights slant independently upwards, with LED indicators discreetly filling out the upper, outer tips. This new ‘face’ also changes subtly between high and low beam. The slim LED rear tail light/indicator unit is still two-tiered, but larger in size for increased visibility.

The rider’s view of the cockpit has been enhanced – the use of black against chrome around the handlebars adds a premium touch, as do chromed, tapered handlebar bar ends. The large left hand fairing pocket will easily hold a water bottle or drinks can and now has an extended lid (compared to the old design) to allow the rider to access the contents easily. It also contains a 12V AC adaptor.

Internal capacity of the underseat storage has been increased 1L to 28L, with no increase in body width, and will easily hold a full-face helmet. The owner’s manual and tool kit are now located on the underside of the seat.

The 2018 PCX125 has a new chassis; the tubular steel ‘underbone’ design of the previous model has been replaced with a full steel duplex cradle.

This has improved the machine’s handling ability and feel, without losing the in-town manoeuvrability the PCX has always been famous for, plus its user-friendliness and relaxed riding position. Also (for the first time on a Honda scooter) a plastic main fairing stay has replaced the steel structure used before; this, and the frame redesign has shaved 2.4kg from the structure, further aiding agility.

Wheelbase is 2mm shorter at 1,313mm, and steering geometry remains the same, with 27° rake and 86mm trail. Overall kerb weight is 130kg. Both front and rear wheels are lighter and use thinner rims, with an 8-spoke (rather than 5-spoke) design.

The 31mm front forks are unchanged with 89mm axel travel, but the rear shock absorbers are re-sited more towards the rear of the machine; they now use tri-rate (rather than dual) springs for a smoother ride, whether on rough city streets or out of town.

A range of accessories are available for the PCX 125: 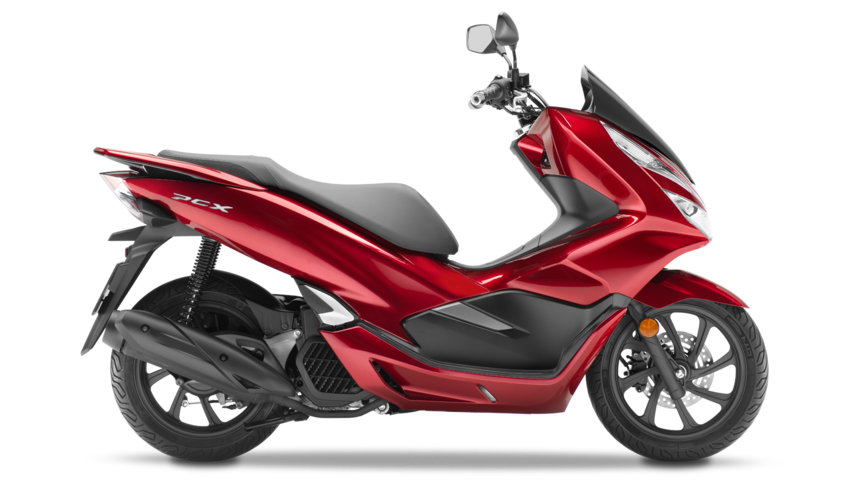 To ride the PCX 125, at the minimum you will need a CBT and a provisional. This requires an L plate attached to bike.

The minimum age to hold an A1 licence is 17. With an A1 licence, you can ride a light motorcycle up to 11 kW (and a power-to-weight ratio not more than 0.1 kW per kg) and 125 cc. You may also ride motor tricycles with a power output of not more than 15 kW. The requirement is that you have passed your CBT, theory test and practical test.

Feel at ease buying your next vehicle. Let our dealership come to you! Book an appointment to get a full interactive video with one of our team, we will show you the whole vehicle in full detail, and even give it a little drive for you if you like (safely of course).

Rest assured we will be transparent and friendly (we like talking to people). We can use WhatsApp, Facetime or Zoom and YES we deliver. To book a live video viewing please contact us.

Vehicle viewing from your home

Arrange a time to suit you

Ask our experts any questions

We have a dedicated delivery team, fully briefed, rehearsed and well experienced team of drivers. Completely contactless, safety comes first with strict distancing, sanitising, plastic wrapping and even a wipe of the keys before we pass them over.

We will deliver mainland UK. Costs vary depending if we are already doing a delivery near you, so make sure you contact us, you may be pleasantly surprised! Work or home deliveries available. Part exchanges taken.

Delivery outside of working hours

Experts in customer satisfaction, from a distance. We all have desires/needs for a vehicle, but we absolutely understand that it is not as easy as to just go and buy it - but not impossible.

Our drivers are trained in how to deliver your vehicle safely, from seat covers, to masks, to disinfecting the vehicle on your driveway. We deliver to every corner of the country, so please get in touch. Experts in customer satisfaction.

The team at North West Honda Super Centre have been very busy refining our ‘Contacless’ sales process keeping both customers and employees safe at this difficult time. Which means it has never been easier to buy your motorcycle, without having to leave the comfort of your own home.

How Does it All Work?

We have an extensive range of new and approved used vehicles available to view on this website as well as many other digital platforms such as Facebook, AutoTrader, Car Gurus & more.

Whether it be phone, eMail or direct message, our friendly sales team are on hand to discuss your needs. We offer everything from full video walkthroughs of our vehicles as well as being able to assess and value part exchanges remotely.

Step 3 – A Deal that works for you

Once your happy with the offer, all the paperwork can be done from home including any finance documentation.

When the deal is sorted our team will then prepare your chosen vehicle, giving it a full valet service. All surfaces will be wiped down and cleaned thoroughly according to government COVID-19 guidelines.

Step 5 – Choose to Click and Collect or arrange a Delivery

We have a designated, safe Click and Collect collection point at all our dealerships or choose delivery. When choosing delivery, fees may apply, but this will be discussed with you prior to sale. Our delivery driver will arrive at your chosen destination, clean the keys and place them somewhere of your choosing. Either option will be carried out while adhering to social distancing practices. We will be wearing appropriate Personal Protection Equipment (PPE) and use a disposable seat cover, ensuring there is no cross contamination. Any part exchange will either be left on site or collected and taken away on the same day.

Step 6 – Relax, and enjoy your motorcyle.