Choose today the biker you want to be tomorrow

Suitable for riders looking to move up from a smaller machine, it instils the excitement of sports bike ownership into every ride yet also delivers sensible running costs, making it a great bike to both commute through the working week and enjoy at the weekend. It’s also found favour with experienced riders looking to downsize their machinery, while preserving the essence of enjoyable motorcycling.

In 2016 the CBR500R assumed sharper styling and LED lighting to go with upgrades to its front suspension; for 2019 it gets an even more aggressive makeover, with a new form and riding position that outlines a keener sporting intent. Its engine is stronger off the bottom and spins readily to the redline, delivering a thrilling howl in the process.

The CBR500R has always proved fast, frugal, affordable and fun. And for 2019 its spirit has not changed – more of the same, yes; and a little something extra.

Already strong off the bottom, the target for 2019 development was faster acceleration through a boost in low-to-mid-range power and torque in the 3-7,000rpm range; the 4% improvement comes via altered valve timing – with ‘close’ timing accelerated by 5° – and lift increased 0.3mm to 7.8mm.

Feeding the PGM-FI fuel injection is now a more-or-less straight shot of airflow through the airbox and throttle bodies. The battery has been re-positioned further away (44.1mm versus 13.4mm) from the rear of the airbox intake duct to allow greater airflow; the exhaust muffler now features dual exit pipes, adding a sportier sounding edge to each pulse. Peak power of 35kW arrives at 8,500rpm, with 43Nm torque delivered at 7,000rpm.

Bore and stroke is set at 67mm x 66.8mm; the crankshaft pins are phased at 180° and a primary couple-balancer sits behind the cylinders, close to the bike’s centre of gravity. The primary and balancer gears use scissor gears, reducing noise. The crank counterweight is specifically shaped for couple-balance and its light weight allows the engine to spin freely, with reduced inertia.

Acting as a stressed member, the engine complements the frame’s rigidity with four frame hangers on the cylinder head. Internally the cylinder head uses roller rocker arms; shim-type valve adjustment allows them to be light, for lower valve-spring load and reduced friction.

A silent (SV Chain) cam chain has the surface of its pins treated with Vanadium, reducing friction with increased protection against wear. Inlet valve diameter is 26.0mm with exhaust valve diameter of 21.5mm.

The piston shape is based upon those used in the CBR1000RR Fireblade to reduce piston ‘noise’ at high rpm. Friction is reduced by the addition of striations on the piston skirt (a finish that increases surface area, introducing gaps in which oil can flow for better lubrication). As with the CBR1000RR, an AB 1 salt bath process, used after isonite nitriding, forms a protective oxidisation membrane.

The ‘triangle’ proportion of crankshaft, main shaft and countershaft is very similar to that of Honda’s four-cylinder RR engines and much of the internal structure and engineering is taken directly from the CBR1000RR.

The crankcase uses centrifugally cast thin-walled sleeves; their internal design reduces the ‘pumping’ losses that can occur with a 180° phased firing order. Using the same internal relief structure as that of the CBR1000RR, the oil pump features improved aeration performance, with reduced friction; a deep sump reduces oil movement under hard cornering and braking. Oil capacity is 3.2L.

A six-speed gearbox mirrors that of its RR cousin and uses the same gear change arm structure and link mechanism. New for 2019 an assist/slipper clutch enables lighter upshifts and smooths out any hard downshifts.

For its 2019 evolution the CBR500R’s fully faired form is made more aggressive still with straight, wedge-like feature lines and extended lower fairings that emphasise a real sense of speed. The rider’s seat pad and seat unit – plus the upper and side fairings – have been narrowed to improve ergonomics and movement. Sharply- chiselled dual LED headlights stare menacingly ahead, and the addition of LED indicators now means all lighting is LED.

The view forward, from the CBR500R’s cockpit, is pure sports. The handlebars now clip on beneath the sporty, redesigned top yoke and as a result the riding position is canted 8° further forward; the fairing is also set lower, to give the rider Total Control ­– the design philosophy behind the styling redesign, and a mantra for Honda’s super sports range since the 1992 arrival of the Fireblade.

New LCD instruments feature a Gear Position and Shift Up indicator; this is set to a default 8,750rpm but can be adjusted in 250rpm increments between 5-8,750rpm.

The 35mm diameter steel diamond-tube mainframe is unchanged for 2019. It’s light and strong, with a tuned degree of yield that gives plenty of feedback to the rider as road surfaces change. The shape and position of the engine mounts, plus the frame’s rigidity balance also reduces vibration.

Wheelbase is 1410mm and rake and trail are set at 25.5°/102mm giving nimble, yet confidence-inspiring steering. Mass centralisation, with the engine in close proximity to the swingarm pivot point, delivers turning agility and optimum front/rear weight distribution ensures stability. Kerb weight is 192kg.

A range of Genuine Honda Accessories are available for the CBR500R. They include: 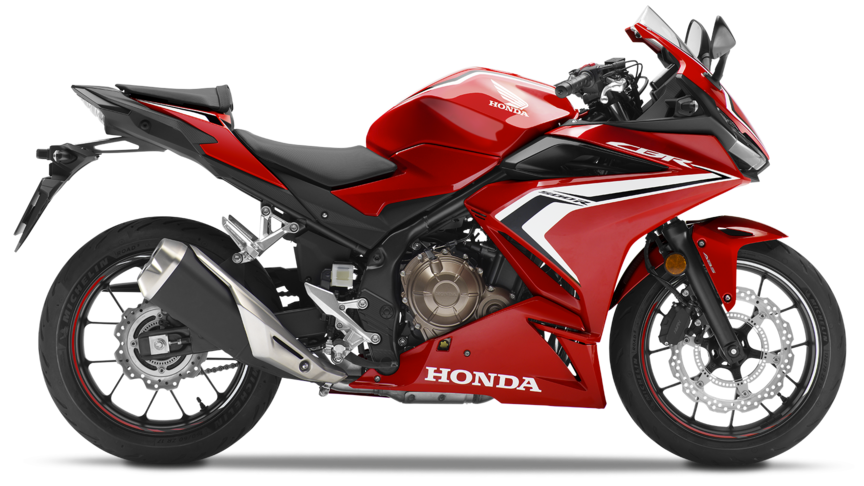 To ride a CBR500R, you will need a minimum of an A2 licence.

The minimum age to hold an A2 licence is 19. With an A2 licence you can ride a standard motorcycle up to 35 kW (and a power-to-weight ratio not more than 0.2 kW per kg), the bike must not be derived from vehicle more than twice its power.

Tell me more
Previous Next