Take riding to the next level

Since its introduction in 1992, the Fireblade has seen many changes and been through many evolutions – each underpinned by the concept of Total Control. Each generation has built on the legacy of the original Fireblade, providing a superbly balanced package that works incredibly well on track and, even more importantly, is both exhilarating and uniquely rewarding to ride out on the open road.

For 2019 the Fireblade receives updates to the visual appearance. Less conspicuous are some significant updates to the electronics package, led by rider feedback and intensive work from Honda’s R&D engineers, as well as the HRC MotoGP team.

Honda’s engineers exhaustively re-examined the Fireblade’s 999.8cc inline four-cylinder engine to make it as light and powerful as possible. The result of the work is an extra 8kW, the loss of 2kg and raised rev ceiling of 13,000rpm.

Peak power is 141kW @ 13,000rpm, with peak torque of 114Nm delivered @ 11,000rpm. Bore and stroke remain 76 x 55mm but compression ratio is up from 12.3:1 to 13:1. This is an engine in a very high state of tune and the crankshaft, valve train and transmission all use higher specification materials than the previous design.

The pistons feature an optimised wall thickness and a new crown design to raise the compression; the surface finishing of the piston-ring grooves has also been modified to improve sealing performance and efficiency. Valve lift and cam timing has been revised to match the higher rpm and greater engine performance.

Every part of the engine was scrutinised to see if it could be made lighter. All the engine covers are redesigned (clutch cover is aluminium; the ignition cover magnesium) and the length of the bolts, water hose and water hose bands have been reduced.

With a revised, rounded shape the radiator is 30mm narrower in overall width and 100g lighter (including a 30cc reduction in water capacity). Using a new high-density core it achieves identical heat dissipation and contributes to the slimmer frontal area of the fairing cowls.

The assist slipper clutch is completely revised with a single die-cast pressure plate and clutch centre, and offers reduced load at the lever. For downshifts the slipper functionality remains the same as before but aluminium cam parts (instead of steel) save weight. The gap between the accelerating and decelerating cams has also been optimised, again improving lever feel when changing gear. All of the transmission gears have been pared down to save weight.

The titanium irregular cross-section muffler is 2.8kg lighter and minimises the centre of gravity change; it also creates an unmistakable sound tone from the exhaust on an open throttle. The exhaust supplier to the Honda Repsol MotoGP team was asked to develop the prototype and produced an exquisite design with the 4-2-1 double-skinned downpipes incorporating the exhaust valve within the first main pipe.

Reflecting input from the HRC MotoGP programme, the amount of torque delivered when further opening a semi-open throttle (such as at corner exit) has been increased, particularly in Power Mode 1. The result is a performance level tailored for circuit running on high-grip tyres – with faster, lap time-reducing corner exit acceleration.

Minimal and dynamic are two words used to best describe the Fireblade’s new styling. The design team wanted to create tightly compact proportions and the upper and middle fairing surfaces have been reduced in size as far as possible. Forward tilting character lines inject an aggressive attitude, with a focus on mechanical functionality, detail and quality of finish.

24mm in width has been squeezed from the upper fairing. Airflow control from the flow surfaces of the fairing, to the surface angle of the headlights and the contouring of their side slits supports stability at speed. In a racing crouch the rider is tucked well out of the airstream. In normal riding situations air pressure is evenly distributed on the rider’s shoulders, back and sides.

18mm has been saved across the middle fairing and its ‘knuckles’ double as radiator intake structures that pass discharged air around the outside, and underneath, the rider’s legs. The knee grip area is 15mm per side slimmer, with the interface between tank cover and the seat unit athletically accentuated.

For circuit riding, where throttle openings are wider and lean angles deeper than public road riding, changes have been made to allow improved vehicle behaviour during HSTC operation. By including into its calculation logic a consideration for the rear tyre profile, the intervention of HSTC as the machine leans has become more uniform and precise. The result is smoother vehicle behaviour during HSTC operation on corner exit, and increased confidence for the rider.

Many riders at a circuit wish to run a high level of Wheelie Control with minimum amount of HSTC input in order to manage wheelspin and slides, without fear of the front wheel rising too far with resultant loss of speed. Whereas on 17YM, low HSTC setting brought with it low Wheelie Control, these functions are now separated to allow set-up combinations such as low HSTC setting with higher Wheelie Control.

Furthermore, the new Wheelie Control system logic means that, however strongly the front wheel lifts, its ‘landing’ is smoothly controlled, and the rider is able to fully concentrate on acceleration performance for the best possible lap time.

Accordingly the TFT display now has a ‘W’ for ‘Wheelie Control’ (with 3 levels available) alongside the Power, Engine Braking and HSTC settings.

The Fireblade’s physical handling has been transformed. Rake and trail remain 23 °20’ / 96mm but the hollow die-cast twin-spar aluminium frame’s rigidity balance has been significantly adjusted to give even sweeter handling with outstanding steering response, feel and stability.

Thinned frame walls save 300g. While transverse rigidity is unchanged, the frame is 10% more flexible in the torsional plane, which works to deliver a faster-reacting chassis. Yaw moment of inertia has been reduced by 15%; roll moment of inertia by10%. The Honda Electronic Steering Damper (HESD) unobtrusively maintains stability.

The rear suspension features a fully adjustable Showa Balance Free Rear Cushion (BFRC). Instead of a conventional single-tube layout, BFRC uses a double-tube design: the damper case and an internal cylinder. The damper piston has no valves – instead the damping force is generated as displaced oil passes through a separate damping component.

This allows pressure changes within the shock to be smoothly controlled. And because there are no small amounts of oil being used at high pressures, damping response and reaction are improved, and damping force can function smoothly during load input. Moreover, damping weight is generated consistently when switching from rebound to compression due to even pressure changes.

The die-cast aluminium subframe too has been redesigned and its thinner construction is at the same time highly rigid and 600g lighter – contributing to the concentration of mass and thus neutral handling feel with improved agility. Wheelbase is 1405mm; seat height is 832mm. 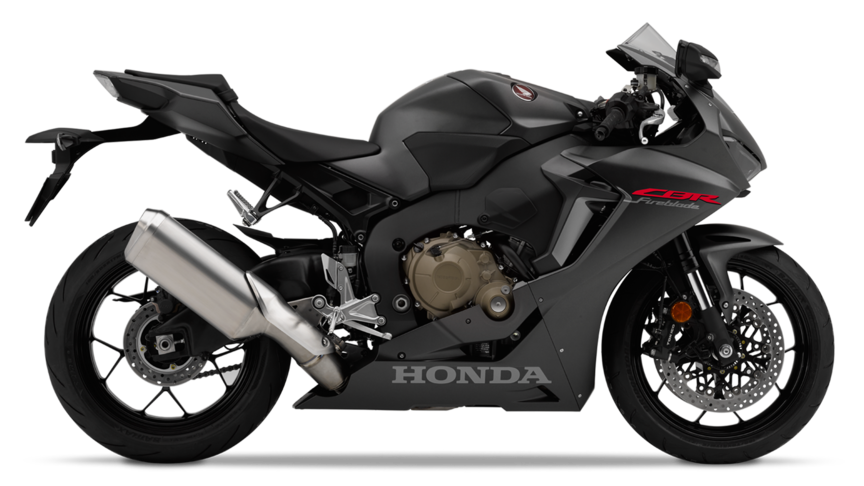 To ride the CBR1000RR Fireblade, you will need an A licence.