The prospective agreement offers you the option to return the Goods at the end of the repayment period for a Guaranteed Future Value of £4,070.98

Since 1959, when they first adorned the twin-cylinder CB92 Benly, the two letters CB have always meant a great deal to Honda, and Honda owners. And they came to mean even more in 1969; the four-cylinder CB750 was a seminal moment for motorcycling as the world’s first production superbike took centre stage, laying down a blueprint that still stands today.

In the present day, old school has become very much new school and in 2013 Honda brought the CB1100 - already a best seller in the Japanese market - to Europe, satisfying pent-up demand from an army of riders for whom a traditionally styled air-cooled four-cylinder CB was a must-have piece of engineering craftsmanship.

Proudly at the heart of the CB1100 EX is its silky-smooth DOHC engine. Linear, instantly accessible power and torque is what this motor’s all about, and plenty of it, anywhere in the rev range. Maximum power output of 89bhp arrives at 7,500rpm with peak torque figure of 91Nm delivered @ 5,500rpm. Air (via 2mm fins) and oil-cooled (via a 335mm 9-tier, front-mounted oil cooler), the engine revs to 8,500rpm and features a compression ratio of 9.5:1. Bore and stroke is set at 73.5mm x 67.2mm.

PGM-FI and 32mm throttle body are fed through a revised, shortened air inlet tract and new air cleaner, and work with the pair of shorter (minus 70mm in length, 7% less in diameter and 2.4kg lighter than previous design) chrome plated exhaust mufflers to boost low and mid-rpm engine reaction.

Internally split into two expansion chambers, each muffler features dual hole-punched link pipes optimised for resonance and the generation of an evocative four-cylinder engine note. Both mufflers hug the machine tighter for improved ground clearance and the downpipes are double skinned to stop heat-induced discolouration.

An assist slipper clutch is now fitted. With die-cast aluminium cam and slipper cam it saves weight, reduces lever effort by 16% and minimizes rear wheel ‘hop’ through engine braking on rapid down changes. The six-speed gearbox, ­­with carefully matched ratios for gears 1-5 gives crisp response and acceleration, while 6th is an overdrive reducing fuel consumption and lowering engine rpm at highway speeds. Final drive is by 530 chain.

The side panels are made of brushed aluminium with a textured ‘hairline’ finish while the seat is well padded and comfortable. Chrome seat rails add seamless lines, with no clutter, and the chrome steel rear mudguard has a more rounded cross section. Smaller die-cast aluminium hangers mount both rider and pillion footpegs, while a longer sidestand makes it easier to get the machine upright.

A chromed round front headlight (it’s now LED, with a spiral running light) crowns the front of the machine, underlined by twin horns. It’s held with aluminium stays and flanked by classic-style 70mm diameter indicators. The LED rear light, indicators and number plate mounting bracket has been minimalised for a streamlined look.

The CB1100 EX’s classic tubular steel double cradle frame holds the engine with four rigid and two rubber mounts. It features relaxed steering geometry, with rake and trail of 27°/114mm and wheelbase of 1490mm, delivering sure-footed stability with neutral handling characteristics. The ‘rider triangle’ is also relaxed and upright; seat height is 790mm and the handlebar shape has been revised to maintain a neutral position. Kerb weight is 255kg.

To give excellent control the CB1100 EX is equipped with a Showa Dual Bending Valve (SDBV) 41mm front fork, which uses two valves to generate both compression and rebound damping force for a linear suspension feel. A new die-cast aluminium top yoke features a buffed finish and clear coat, while the bottom yoke holds the fork legs in a higher position.

Twin Showa rear shocks offer adjustable spring preload and operate through a steel swingarm, which has a clean look thanks to an under slung rear brake hose. An aluminium chain guard replaces the previous plastic design.

The CB1100 EX features redesigned 18-inch spoke wheels, wearing 110/80 R18 and 140/70 R18 front and rear tyres. Smaller aluminium hubs lace the wheel rim with 40 longer stainless steel (rather than the 48) zinc-plated spokes. Twin 296mm floating discs up front are mated to four-piston Nissin calipers, with a 256mm disc and single-piston caliper at the rear. ABS is fitted as standard.

Together with the look of the exposed engine, the shape of the fuel tank - its curves and lines - go a long way to give a naked motorcycle its character and appeal. Honda’s engineers wanted to maintain a 186 miles plus range, but were also focused on creating a truly hand-made look. The 16.8L fuel tank they came up with does away with the seam-welded lips along both bottom edges, and pays homage both to CB history and contemporary style with a cutaway rear section that displays the cam cover to the rider. An aircraft style filler cap adds another visible touch of class. 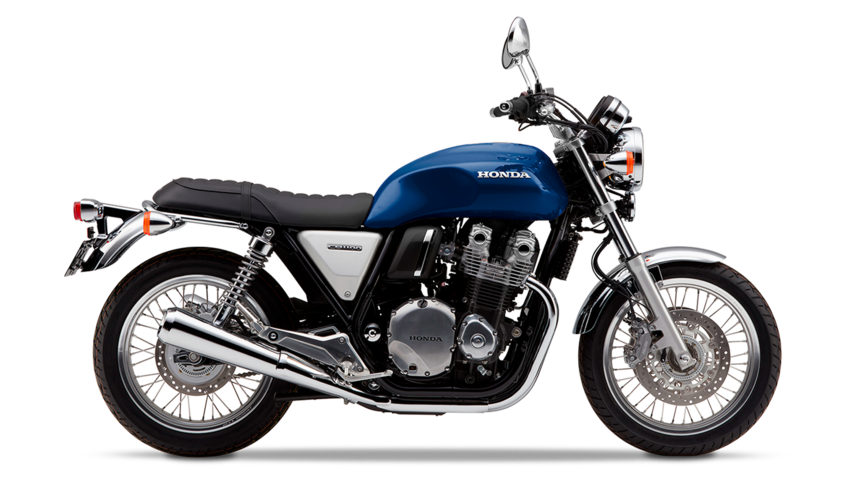